Antibiotice celebrates 25 years of history at the Bucharest Stock Exchange

On Friday, April 15, BVB opened the trading session together with the Antibiotice Iasi team to celebrate 25 years of history on the Bucharest Stock Exchange.

Antibiotice (ATB), one of the most important Romanian generic drug producers, celebrates 25 years since its listing on the Bucharest Stock Exchange (BVB).
The company’s shares are traded on the Stock Exchange starting with April 16, 1997 under the symbol ATB, in the Premium category.
With a rich history and experience in the production of medicines, over 65 years, the development of the company is closely related to its path at BVB.
In terms of investor relations, it is one of the companies that obtained the maximum rating of 10 on the Vektor indicator, which measures communication with investors, an indicator launched by the Association for Investor Relations in Romania. 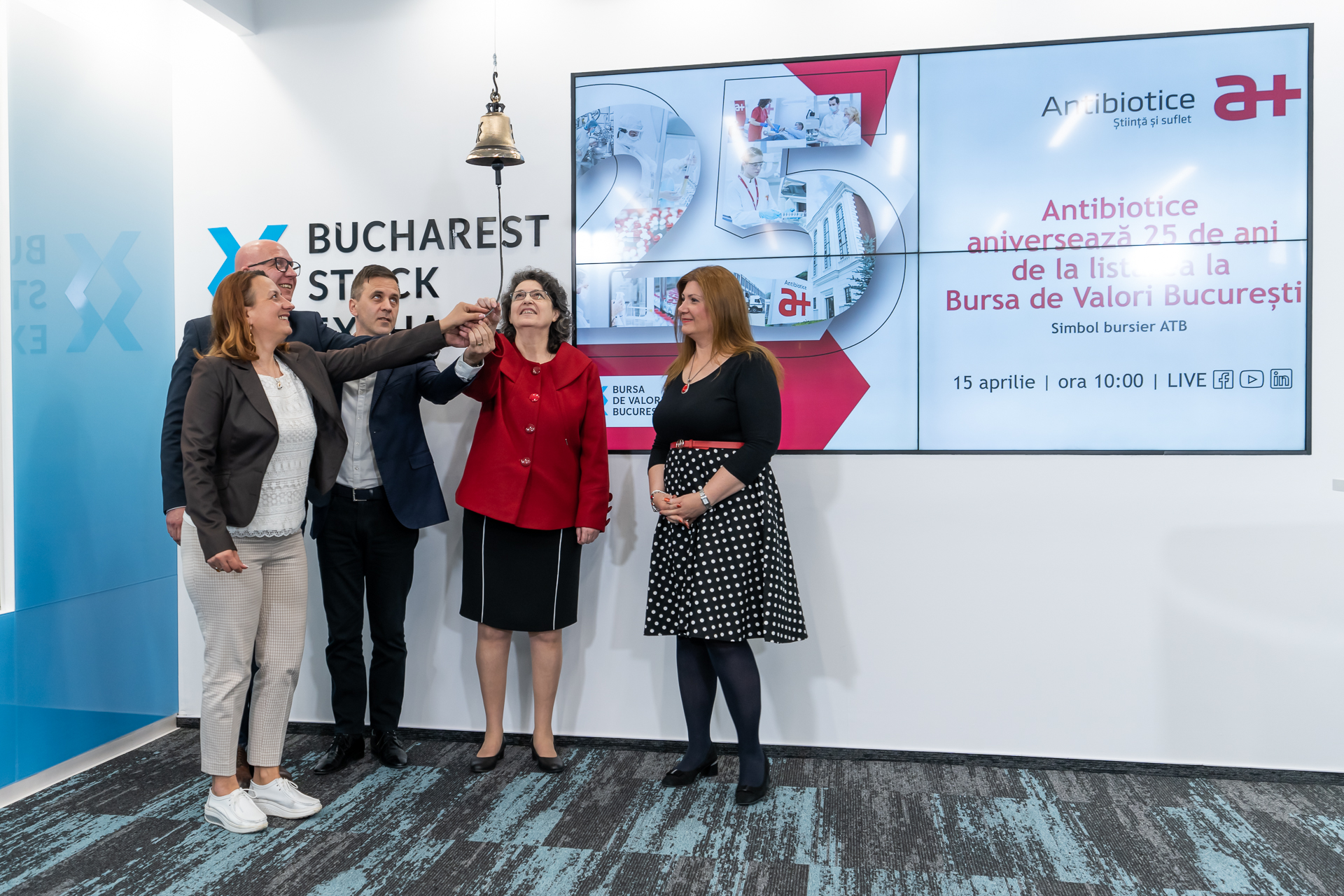 In the 25 years of presence on the Stock Exchange, the company’s capitalization has increased more than 15 times, currently reaching a value of over 360 million lei.

“Antibiotice is a leading company in the Romanian pharmaceutical industry. 25 of the 67 years of activity of Antibiotice are closely related to the company’s course on the Bucharest Stock Exchange. We are glad that we have on the stock exchange an issuer with such a rich history and experience and that operates in a vital field of activity for all of us. The health sector in our country is very well represented on the stock exchange and Antibiotice is certainly an issuer with a very important role and which aims to align with current trends such as the implementation of ESG criteria. Thus, Antibiotice is one of the listed companies with outstanding performance in terms of ESG reporting, as demonstrated by the ESG score received in the project launched by BVB earlier this year. I congratulate the entire Antibiotice team for all the successes so far and I wish them much success in everything they will achieve from now on “, said Adrian Tănase”, CEO of the Bucharest Stock Exchange.

Antibiotice is a company with a rich history and 67 years of experience in the production of medicines whose development is closely related to its course on the stock exchange.

Listing Antibiotics on the Bucharest Stock Exchange was an extraordinary thing because it meant Life for Antibiotice.

“Antibiotice is the largest local producer of medicines with Romanian capital with an impressive 67-year history. For 25 years, our journey has been linked to our presence on the local stock exchange. I can say with certainty that the Bucharest Stock Exchange has been a forerunner of increasing the transparency and predictability of the Antibiotice company. Today, when we talk about the 25 years on the capital market of the Antibiotic company, we can say that it was an absolutely necessary stage and a success. As before, we aim to be ingenious and adapt to the requirements of our end consumers but also to those of our investors and capital market partners. The maturity of the team, the guidance of the activities according to sustainable management plans and the strict observance of the operating procedures represent the guarantee of our sustainable development “, declared Ioan Nani, General Director of Antibiotice. 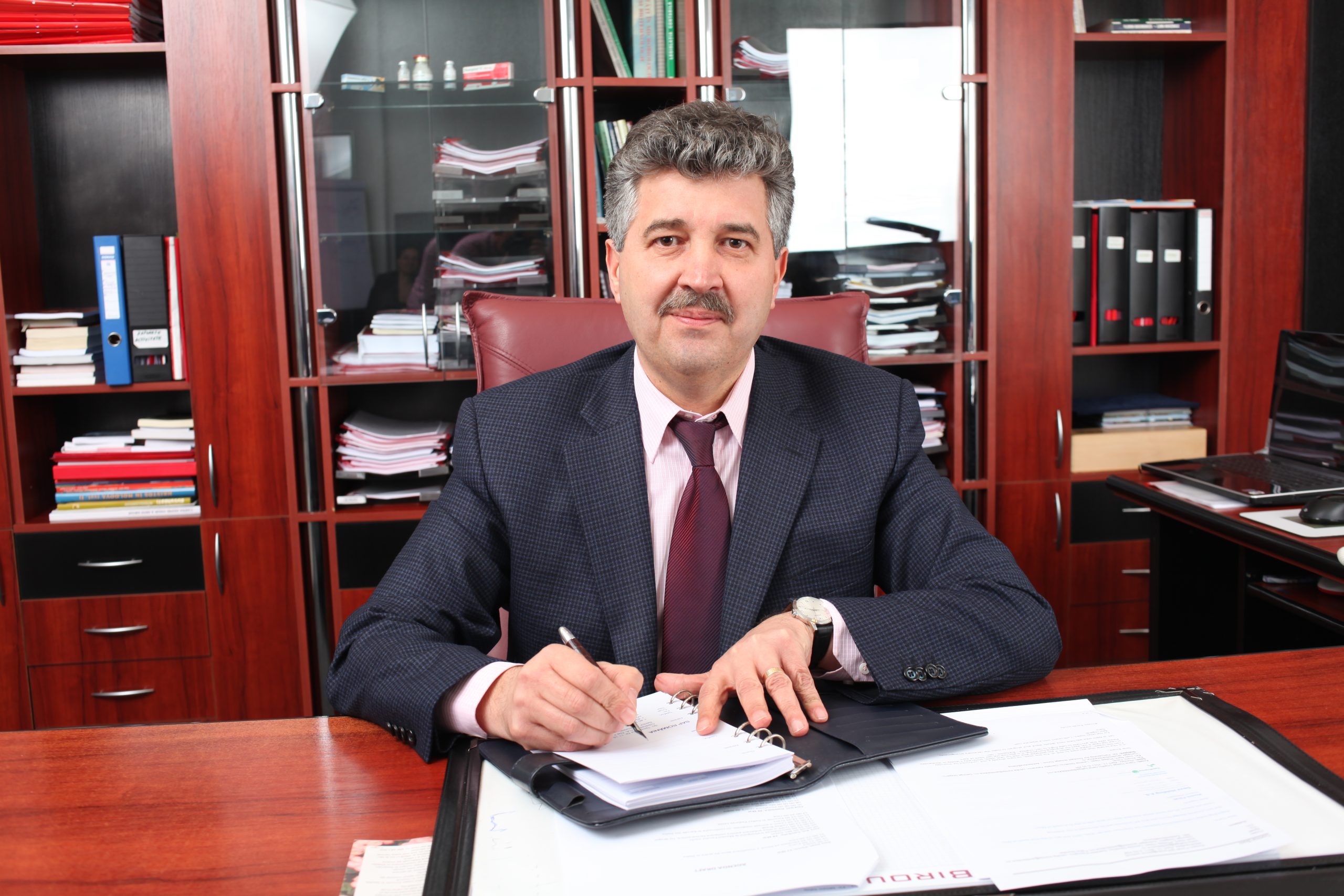 The company Antibiotice Iași was listed from the first year in the first and most important category – Category I, now the Premium category.

“I remember the moment of April 16, 1997, when the first transactions with ATB shares took place. Antibiotice is one of the first companies listed on BVB. It is about Romanian continuity and performance, because you have your own research, you have a portfolio of over 150 drugs from 11 therapeutic classes. The company is also a world leader in the production of nystatin, which is an extraordinary thing, “said Ileana Botez at the opening of the trading day on the Bucharest Stock Exchange. Antibiotice celebrated 25 years of activity on the capital market.
In the 25 years at BVB, over 13,000 transactions were made with the company’s shares, 900 million shares were traded, with a value of 595 million lei. The capitalization increased over 15 times, being over 360 million lei (363 million lei at the reference price on Thursday, April 14) “, said Ileana Botez, Director of the Listing Department of the Bucharest Stock Exchange. 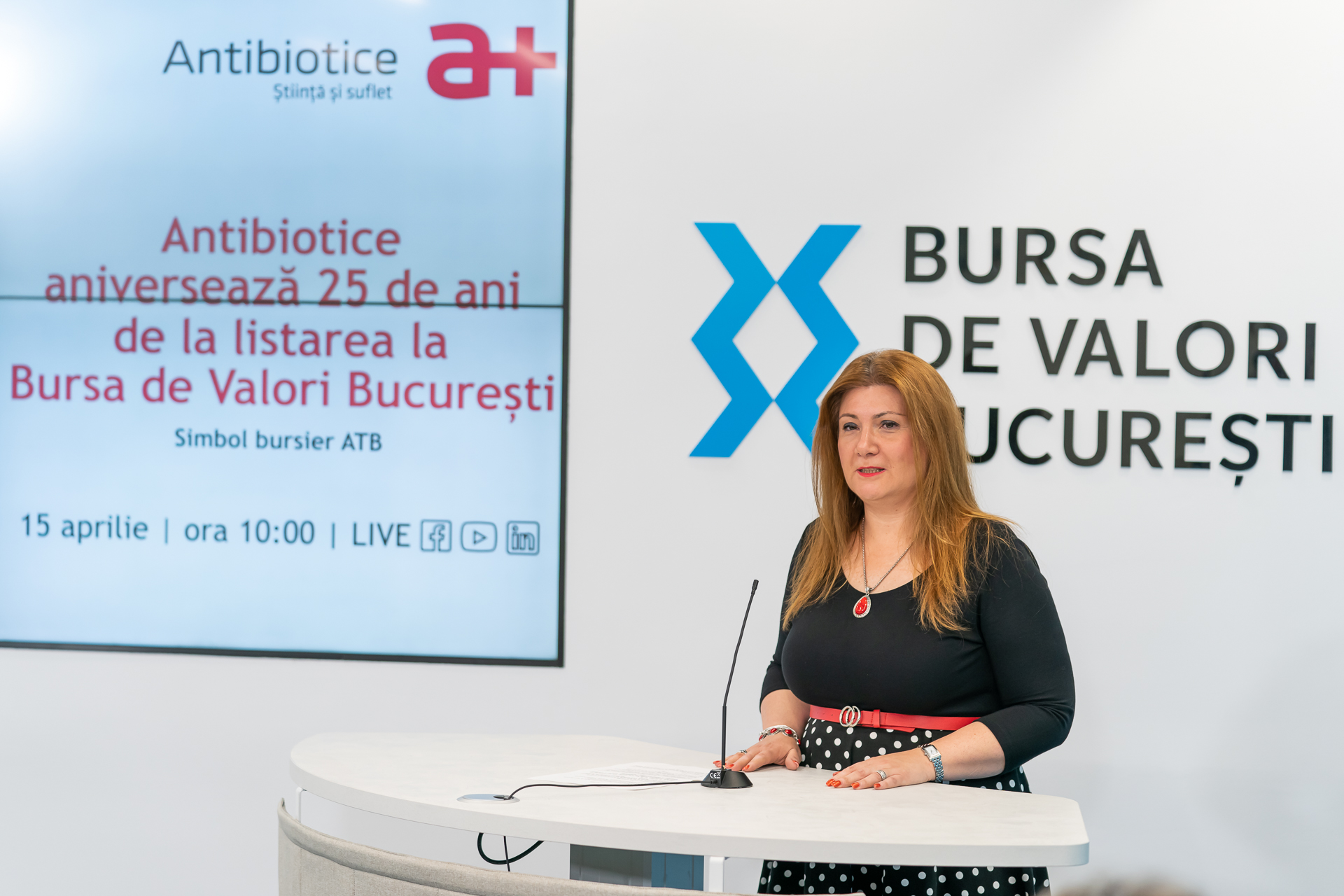 25 years that have meant a transparent development for us.

“For 25 years we have become much more efficient and much more transparent in communicating with the shareholders of our company. We have become much more careful in our way of organizing and implementing all development policies and strategies. (…) We have diversified our product range, we have become better in the market, both in the Romanian market and in the international one. But in addition to this revenue growth, we have become successful in applying growth rates from period to period, so we are in a position to say that our development plan by 2030 will lead to a doubling of the current turnover. , at a rate of return three times higher, based on a coherent cost management plan, a policy of managerial measures involving an increase in sales in a balanced margin between prescription and over-the-counter products, so that we can reduce or minimize the effects of the clawback tax, which brings us additional expense and cost that affects the profit margin. Simultaneously with the managerial measures, we have in plan organizational measures, so that we can reorganize activities in order to have smaller and smaller fixed expenses in relation to the variable expense and the income “, said Paula Coman.

“For the past two years, since we founded the investment plan, in addition to using our own sources, we have been thinking about all possible financing options, in order to be as efficient as possible. We also thought about the option of issuing bonds, but so far we have not gone further with the proposal to shareholders. It is a project, on paper, together with all the other financing variants, both from PNRR and from the sources of the Ministry of Finance, from the banking system and own sources. All the options are on the table at the moment and we will see which ones we will access, depending on the opportunities. According to the company’s economic director, the biggest benefits that Antibiotice has had over time as a listed company are related to increasing transparency and streamlining operations, said Paula Coman. 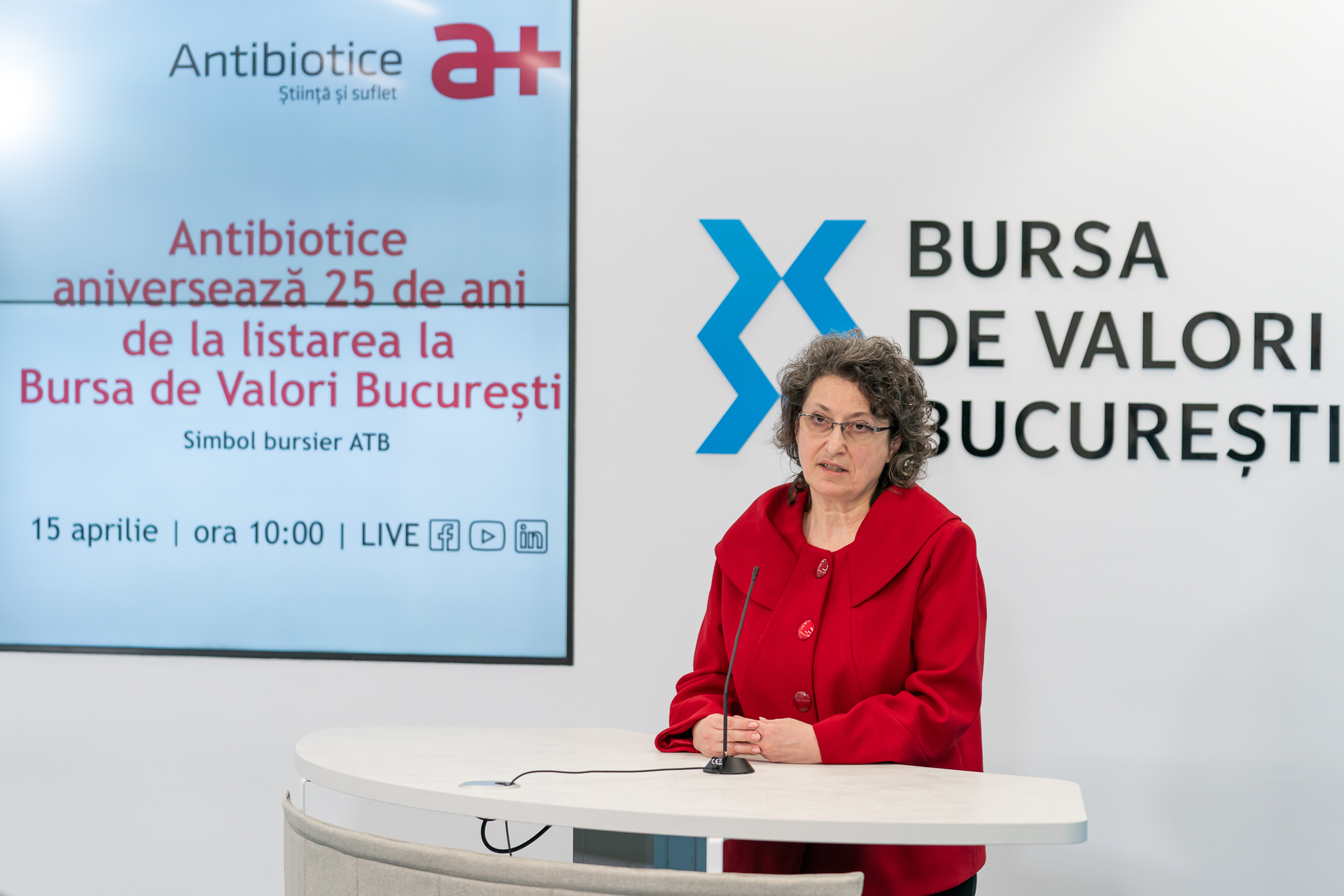 “The biggest benefit of being a listed company is that we have become more organized, more transparent, more efficient, more responsible and more rigorous with ourselves. This has made us, for 25 years, very attentive to all our forecasts, both economically and socially, humanely and environmentally (…) all the things we have. – we proposed, to achieve them almost 100% “, said the Executive Economic Director of Antibiotice, Paula Coman.

To support the development plan, the drug maker is considering all available sources of funding, including a bond issue, says Paula Coman, Antibiotice’ chief economic officer.

We were one of the first companies to connect to the capital market and since then the company has continued to grow, becoming today a consolidated, reliable company with ambitious goals.
“Our international business is all over the world.

“We will continue to develop the portfolio of medicines to be accessible to both patients in Romania and in international markets, with as wide a range of products as possible. We make use of our portfolio of anti-infective drugs, both in hospitals in Romania and in ATB territories abroad. We diversify our supply of prescription drugs – in the area of ​​dermatology, cardiovascular, digestive tract and other chronic diseases – as well as the component of over-the-counter drugs – women’s health, quality of life, family health and a new concept – “Derma a +” – which will launch this year. By internationalizing the business, we want the business to reach over 50% in the export area. Our international business is all over the world. We continue to leverage the core business of injectable anti-infectives in the U.S. and UK markets and strengthen our leadership in Nystatin – the active substance – now marketed in more than 70 countries, “said Ovidiu Bataga, Executive Director of Marketing and Sales at Antibiotice. 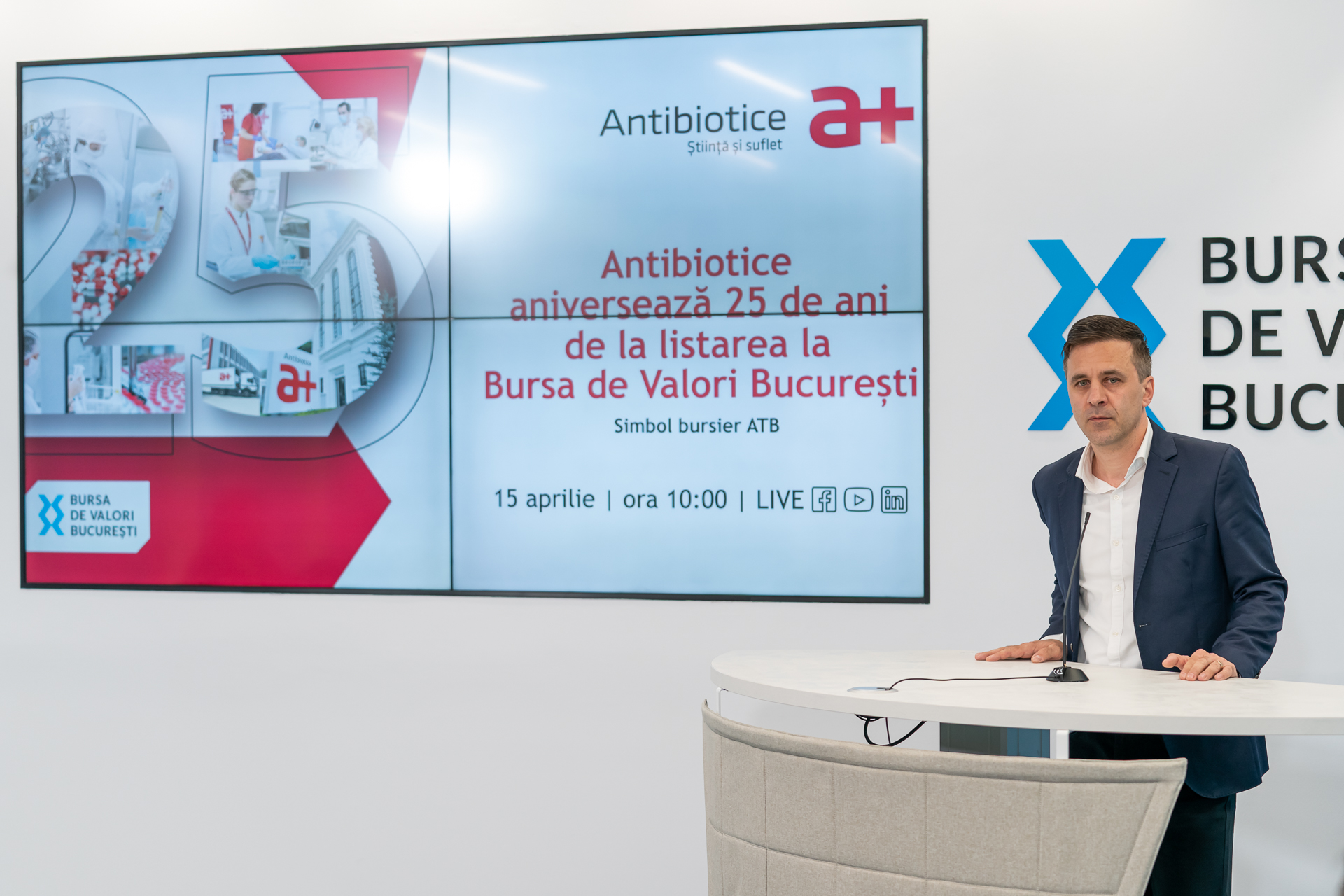 “Indeed, I saw some potential in the Ukraine area, with some staging for launching a portfolio. We retreated after the events now taking place there. The situation in Ukraine does not affect the figures and budgets that we are consolidating every year. We are attentive to the evolution of events, we are constantly in touch with the staff we have there, because we have an office open in Ukraine and we try to control the situation first from a human point of view and then from a business point of view. “, said Ovidiu Băţaga, Executive Director of Marketing and Sales, on the occasion of the event that marked 25 years since the company’s listing on the Bucharest Stock Exchange (BVB).

Antibiotice has a development plan that aims to double the turnover and increase the profitability in the perspective of 2028. To achieve these objectives, the company invests in two important directions: investments for strategic development and investments for business consolidation.

„In the Operational Plan for Strategic Development of the Company, several series of investments are provided that can be financed from own sources, from PNNR or through programs supported by the Romanian government. These refer to investments in resilience (green energy), the optimization of technological processes (digitization of production flows and management elements) and the development of new production sites. Its own research and technology transfer component is also very important in the company’s development, already having ongoing partnerships with academia and research institutes, said Sebastian Costea, Strategic  Project Manager at Antibiotice. 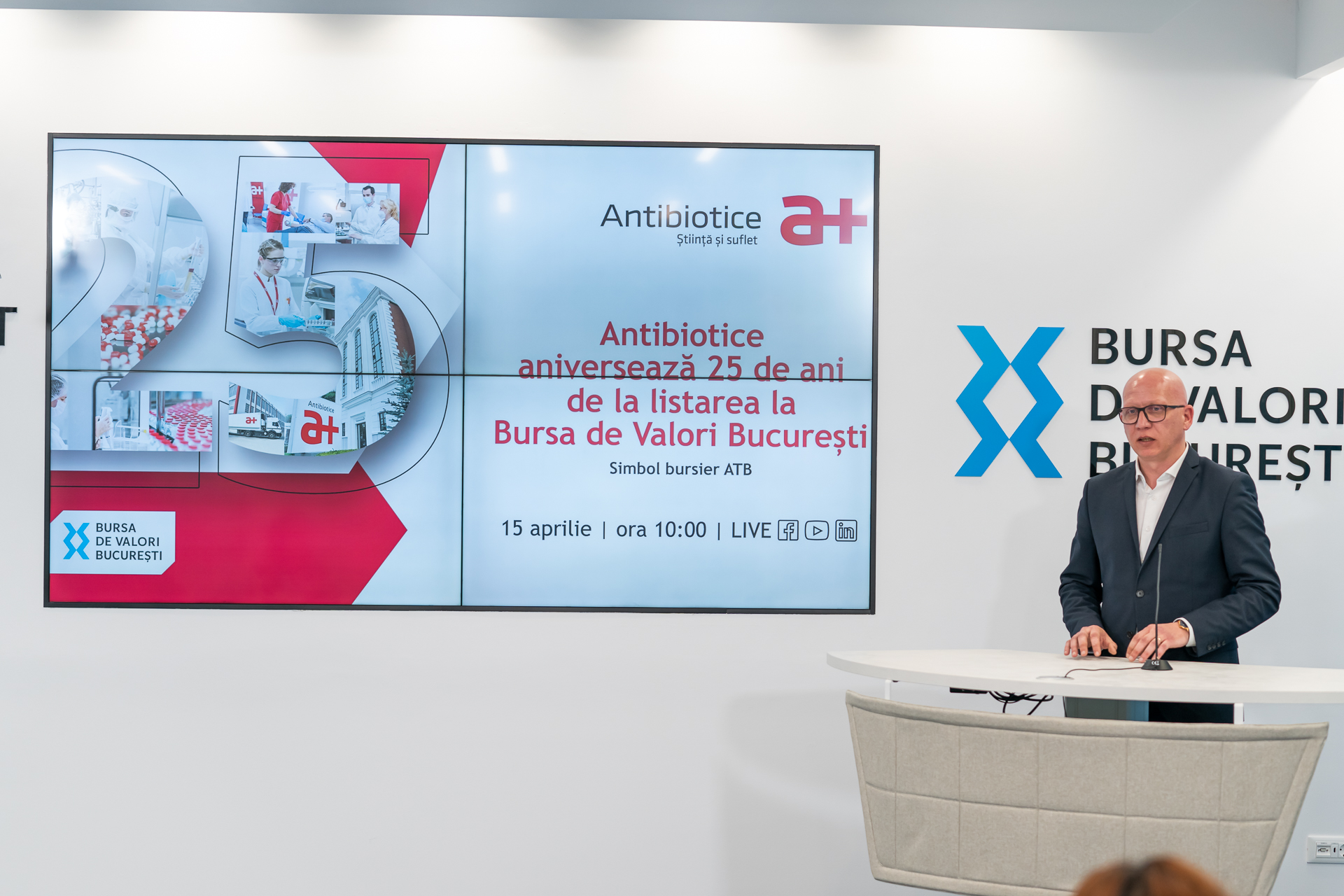 Founded in 1955 in Iasi, the Antibiotice company is now, 67 years after its establishment, one of the most important Romanian producers of generic medicines, whose mission is to manufacture safe, effective and quality pharmaceutical products to give patients hope. a healthy life. Since 1955, when it produced on an industrial scale the first antibiotic in Romania – the active substance Penicillin, the Antibiotice company has developed its production platform, so that now it has the most complex manufacturing structure in Romania, with 8 distinct production flows, which one, unique in the country, is intended for obtaining active substances through biosynthetic processes. Over time, through its own research, Antibiotice has produced a diverse range of generic drugs, reaching a portfolio of over 150 finished drugs in 11 therapeutic classes (anti-infective, cardiovascular, dermatological, digestive, central nervous system, etc.). 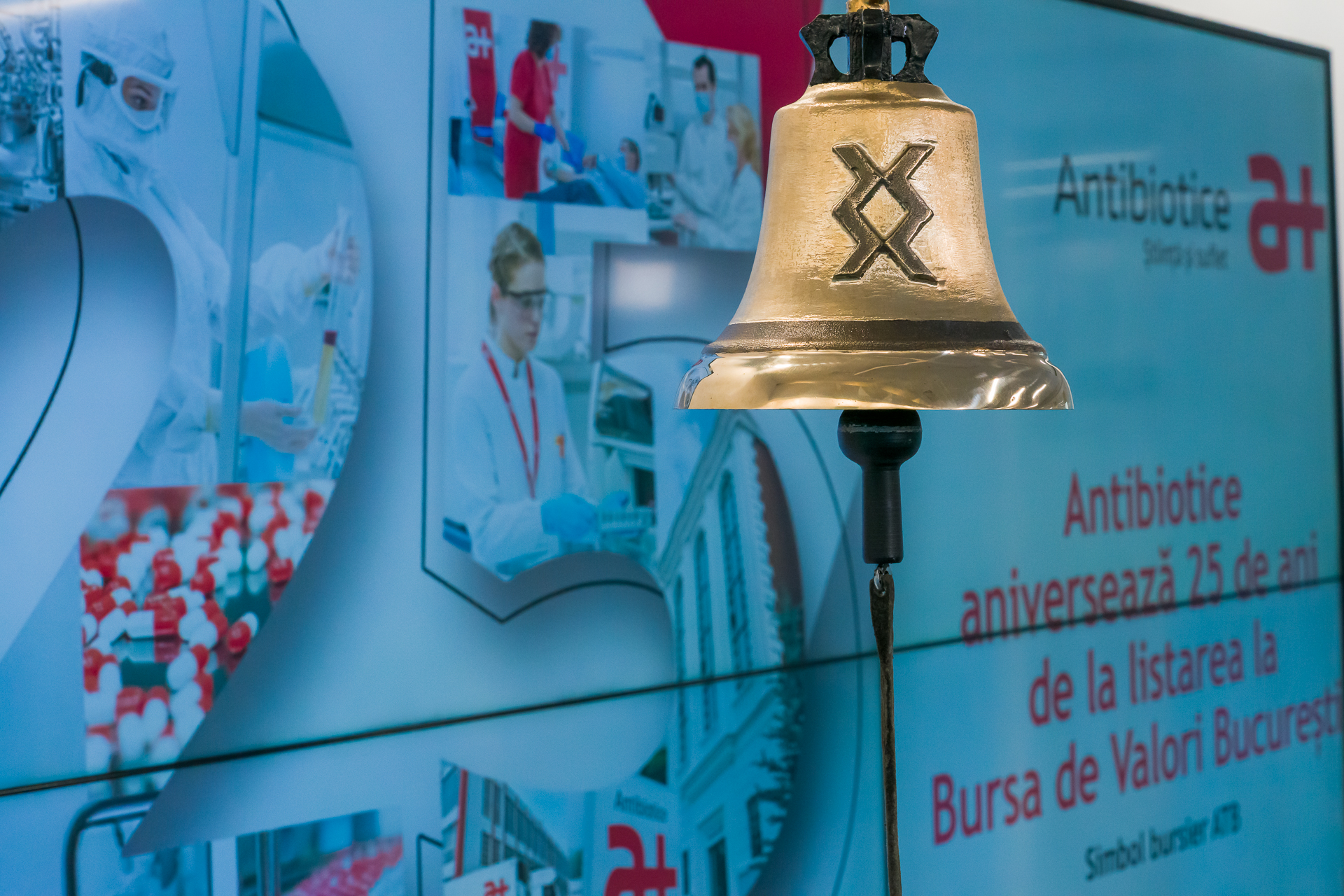 Antibiotice has an active global presence and exports its products to all continents, managing to make valuable medicines more accessible to patients, both in Romania and in over 70 countries around the world.