Here at Antibiotice we are committed to human health care, providing high-quality generic drugs. We followed our targets consistently.  In the the 63th year of our existence, we are the leading producer of generic drugs in the country and a brand with tradition, renowned all over Romania.

In December 1955 the Chemical Plant no. 2 was established in Iaşi, being Romania’s and south-east Europe’s first manufacturer of penicillin – the active ingredient discovered by Alexander Fleming. The actual construction took place between 1953 and 1955. Four years later, the Streptomycin Plant was commissioned and the first pharmaceutical finished forms were obtained, namely ointments and suppositories. Afterwards, the Chemical Plant no.2 changes its name to Antibiotice (the Antibiotics Plant).

New technological flows are developed that manufacture various active ingredients (erythromycin, oxytetracycline, tetracycline, griseofulvin, synerdol, lysine). Throughout this period Antibiotice becomes the single manufacturer of sterile products for parenteral use (injectables) in Romania. In 1977 the Streptomycin manufacture obtained the authorization granted by the US regulatory body, the Food and Drug Administration which opened the way to the international markets.

In the 80’s Antibiotice already exported 50% of its output. The active ingredients manufactured in Iasi became the basis for a wide range of medicines manufactured by local and foreign producers worldwide. In the same period 44 patents were registered in the pharmaceutical industry and 600 technological innovations were applied in the manufacturing process.

Antibiotice shares (ATB shares) have been listed on the first category of the Bucharest Stock Exchange.
The company implemented an efficient quality assurance system that involves a strict control of the manufacturing processes.

Antibiotice becomes the first Romanian producer to obtain the GMP certification for the line manufacturing powders for injection.

Over this time interval we have made major investments amounting to over eight million euro in order to revamp our manufacturing facilities and purchase modern and competitive equipment.
Antibiotice climbs into in the top five world producers of penicillin and penicillin derivatives.
Furthermore, our company produces tablets for the first time, and Ampicillin and Oxacillin are the first capsule obtained on the penicillin manufacturing line.

Antibiotice becomes a joint stock company and takes over the assets of the former company Antibiotice Iasi (according to Government Decision 1200 of November 12th, 1990).
As a result of changes at the macroeconomic level, Antibiotice reorients its production. In the company’s portfolio, finished products become the most important and active ingredients manufactured in this period are being used to develop new formulations. In a short time, over 30 pharmaceutical products are put into production which places the company among the top producers of anti-infectives in Romania.

Constant investments in research, in staff training, in quality and in revamping the manufacturing flows and the working spaces have turned Antibiotice into a profitable, dynamic company with a steady economic growth.

The Nystatin production line was granted the FDA authorization, which allowed the successful exportation of our active ingredient to the United States. As a result, Nystatin became the most important product exported, securing Antibiotice’s position as a top worldwide producer of Nystatin.

2007: the year we gained several pluses

In 2007, Antibiotice gains recognition for the implementation of the Integrated Management System (quality, environment, occupational health and safety) according to the requirements of EN ISO 9001: 2008, EN ISO 14001: 2004 and OHSAS 18001: 2007, being the first Romanian pharmaceutical company to report this performance.
Also, “following the trend of the pharmaceutical market, Antibiotice continued to diversify its portfolio, addressing the cardiovascular and dermatology classes; furthermore, we started research on generic antidiabetics and central nervous system drugs. These steps are part of a strategy to reconfirm the company’s position as a complex drug manufacturer that produces much more than antibiotics”.(Annual Report 2007, excerpt from the CEO’s Message).

Caring for the Environment

In 2007 we managed to complete the investment in a plant for the incineration of organic waste, which, along with our modern wastewater treatment plant, significantly reduce the impact of the company’s activities on the environment.

Antibiotice reported an important boost of both profit and turnover – the fruit of constant investments and the management policy of the past five years, and implemented a system of management by objectives, intended to increase the company’s performance on all levels.
In the same year, when Antibiotice celebrated half a century, a new brand identity was launched (new logo and a new corporate slogan) in order to communicate visually to the wide public the rebranding of process of the company and the structural changes it underwent in recent years.

“Moreover, 2005 remains an important year in the life of our company, not only because we obtained the Certificate of Suitability for Nystatin active substance, but because we started operating on 3 new manufacturing lines for the Capsule Plant and began an important investment in the research infrastructure of our company, namely a modern Center for Drug Evaluation.”(Annual Report 2005, excerpt from the CEO’s Message, Mr. Ioan Nani)

Antibiotice continued to reach higher economic and financial targets which secured its position as the 4th largest producer of generic drugs in Romania, while the global economic crisis persisted. The company’s market strategy was oriented towards the development of Foreign Affairs (we got the FDA authorization for the delivery of injectable drugs in the United States, the number of products exported and international partnerships went up) in response to the need to streamline business and reduce dependence on the domestic market. As a result, the National Association of Exporters and Importers in Romania (ANEIR) acknowledges Antibiotice as the most dynamic export firm in the pharma industry.

At the same time, our orientation towards knowledge and innovation is part of the company’s wider strategy for action, seen as a vital tool to overcome crises in general. “Antibiotice continues to walk towards its true North, i.e. towards knowledge and innovation.(…) In these difficult, troubled times only those organizations that will continue to invest in research, innovation, continuous training of employees and new product development will successfully overcome the crisis. “(Annual Report 2009, excerpt from the CEO’s Message)

2010 – 2011: Following the crisis, Antibiotice will reemerge stronger and ready to meet the challenges of the new reality

Antibiotice obtains the FDA approval for the manufacture of penicillins formulated as powders for injection and delivers the first finished products to the US market, where it used to export Nystatin API only.
Driven by our orientation towards knowledge, the company sets off the project “Summer School a+”, intended for the professional development and training of current staff as well as attracting future professionals in the fields of research, quality control and production.

The company continues to invest in manufacturing technology (enhancing the capacity for producing oral solid forms) and equally in research, by completing the investment in a high-tech Research and Development Center which allows increasing the pace of innovation with respect to the products portfolio.  At the same time, the company puts on the market the first drugs intended for CNS disorders.

“Antibiotice reached the stage where it has the know-how, research capacity, a platform for development and innovation that enable it to connect, at a higher level, with key partners across the globe. (….) In the new post-crisis global context, Antibiotice must reemerge stronger and ready to meet the challenges of the new realities. ” (Annual Report 2010, excerpt from the CEO’s Message).

Antibiotice continues to expand its portfolio, in line with the market trends and joins producers of oncologicals. Moreover, our company becomes the first company in Europe prequalified by the World Health Organization for the range of anti-TB drugs. In order to stimulate innovation, our company launches the initiative “Ideas are free of charge” with the aim to collect valuable ideas and solutions from employees across the company, for streamlining work and a creative exploitation of new opportunities.

In parallel, we outlined our strategy for 2012-2016. “We will continue to make efforts to internationalize business, to adapt human resources to the strategic orientation of our company, to reduce costs and take special measures to protect the working capital. I am convinced that (…) this way Antibiotice will reconfirm that it deserves to be on the panel of the most outstanding and reputed brands in the Romanian pharmaceutical industry and a trustworthy company for its numerous partners from all over the world “(Annual Report 2012, excerpt from the CEO’s Message)

In line with the development objectives already planned out, Antibiotice invests in two quality control laborato ries, in laboratory techniques and a new warehouse for raw materials and production.

Antibiotice expands its traditional portfolio of anti-infectives assimilating the first carbapenems, it is diversifying its portfolio of dermatologicals and CNS addressed drugs, as well as its range of prophylactic products and those enhancing the quality of life (food supplements and OTC).

As a result of the FDA reapproval for Nystatin and sterile powders for injections (2013) and our strive for an increased competitiveness, Antibiotice goes up from second to first position in the world production of Nystatin API and we record the first export of Nafcillin to the US market. At the same time, Antibiotice expands its presence in foreign markets, opening a branch in the Republic of Moldova and an area office in Serbia.

“Expanding exports in foreign markets and developing new partnerships are both strategic moves, as shown by the positive evolution of turnover in the last five years, which has increased from USD 13 million in 2009 to USD 25.6 million in 2014, which is 97%. (….) After Moldova and Serbia, we are considering opening area offices on several emerging markets in Latin America and Southeast Asia, markets where the medicinal products produced by Antibiotice have a significant potential for growth. “(Annual Report 2014, excerpt from the CEO’s Message)

2015 – Antibiotice gets the USFDA reaproval for the sterile injectable finished products and Nystatin (API).

Antibiotice imposes worlwide the quality standard for Nystatin by obtaining
the title of international reference standard for the active substance Nystatin
granted by the United States Pharmacopeia (USP). 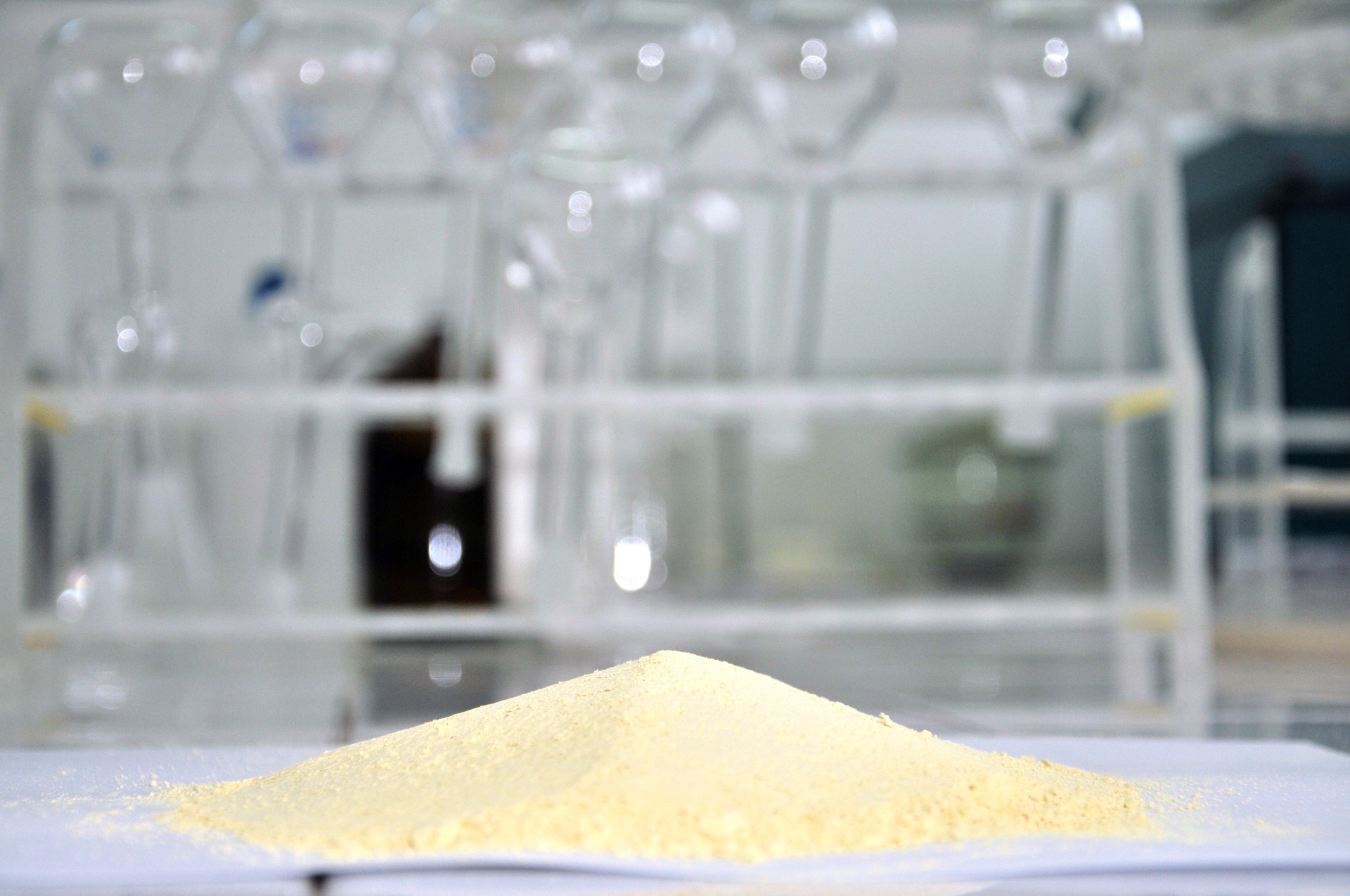 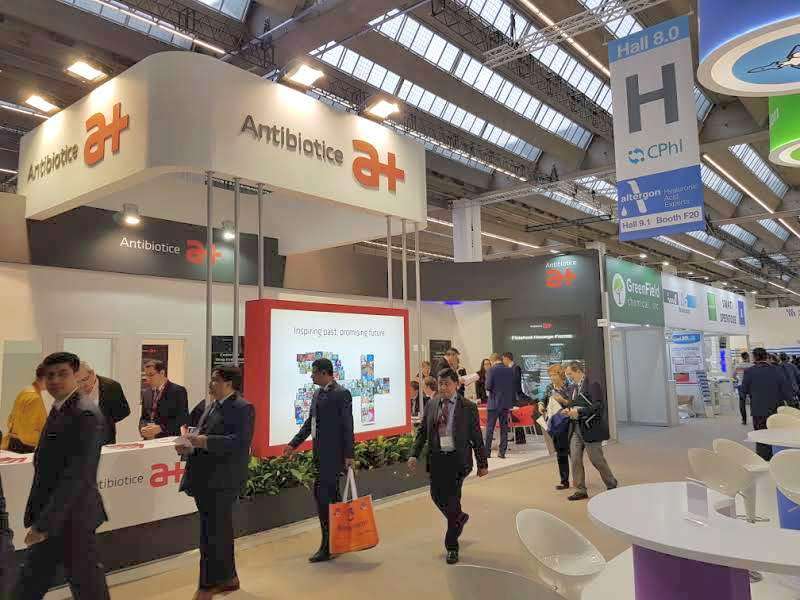 Antibiotice won the third place at the “Romanian CSR Awards 2018”,
in the Intersectoral Partnership category, for the project
“Science and Soul” scholarships. 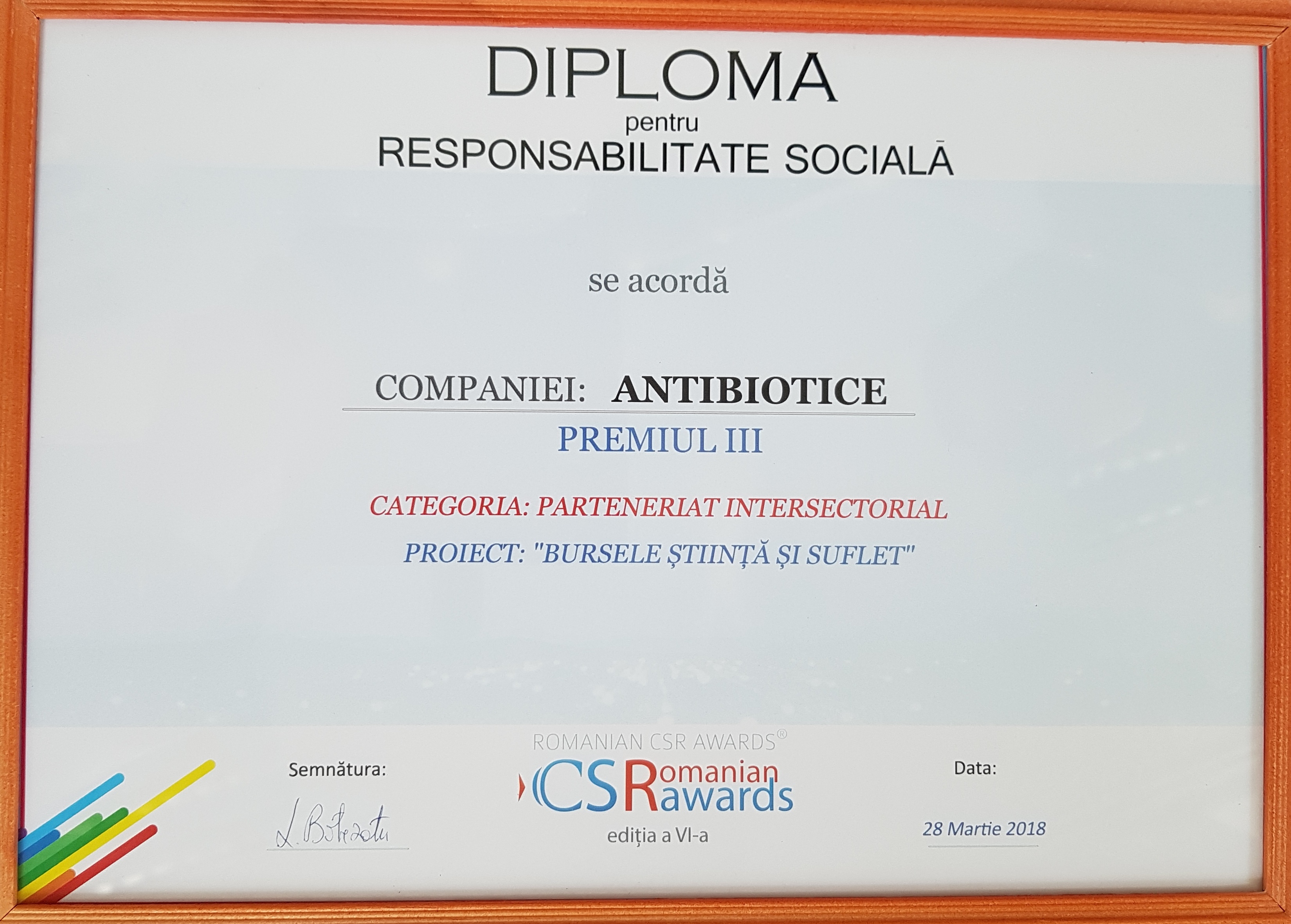 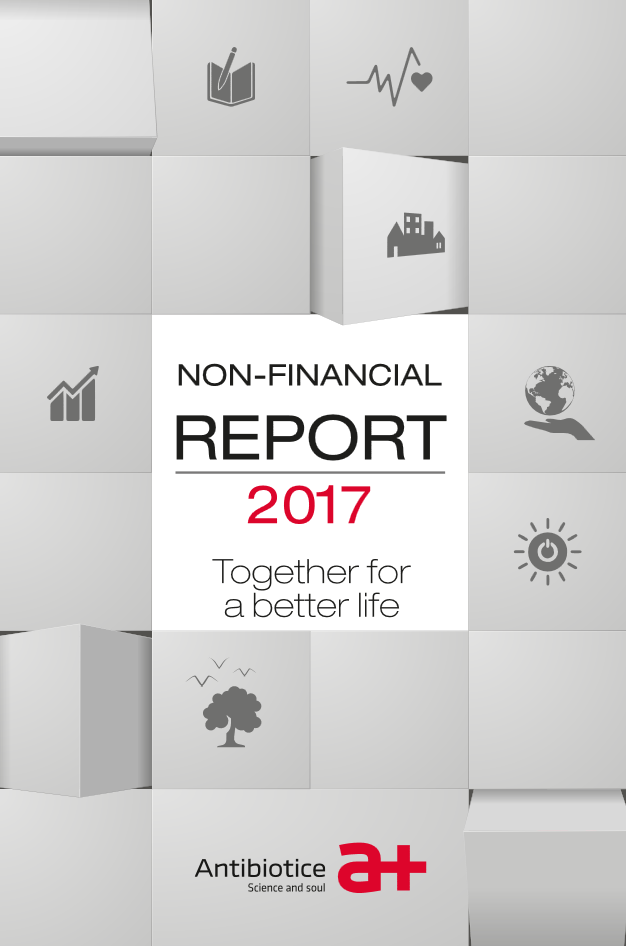 Antibiotice launches the ”Antibiotics of the Millennium III”,
a social responsibility program which supports the judicious use
of  antibiotics in the human and veterinary medicine. 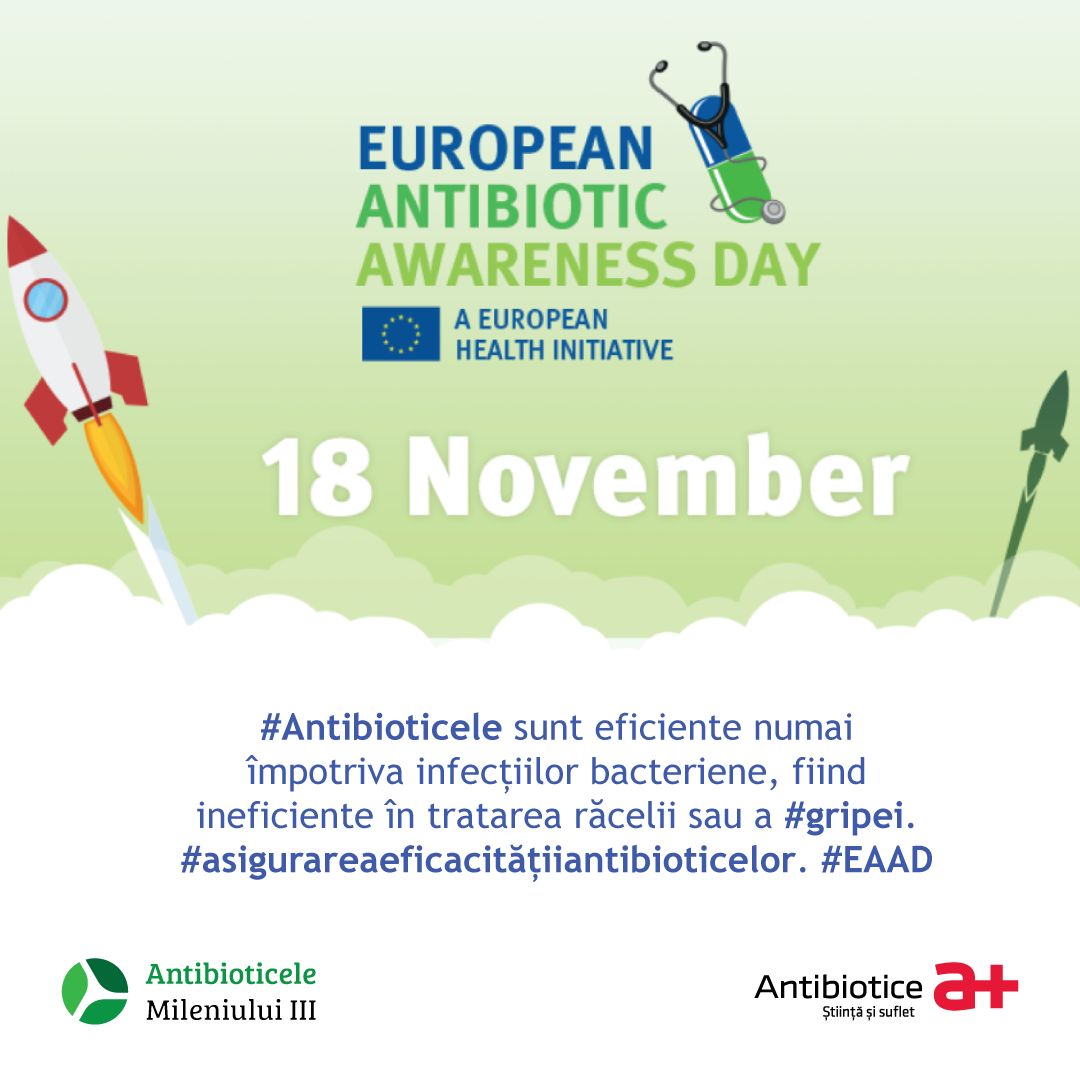 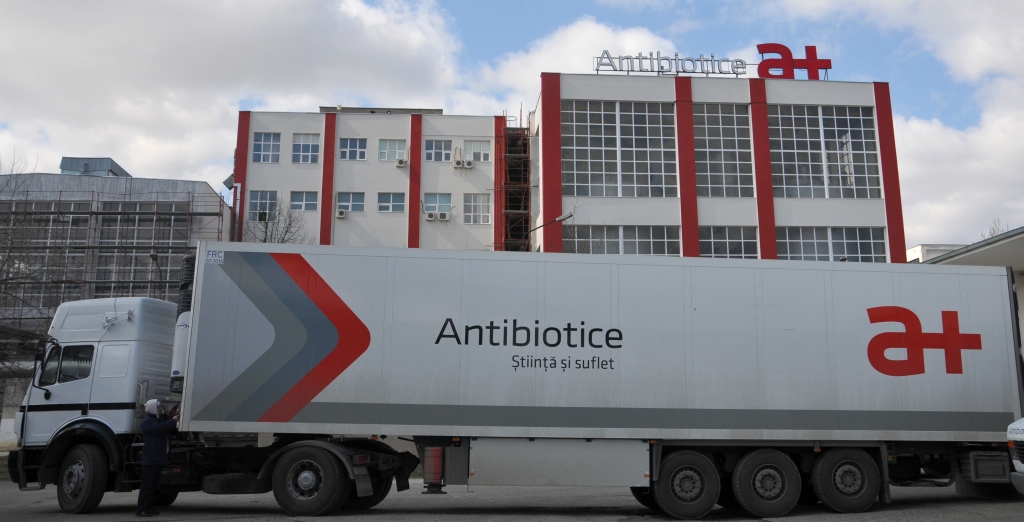 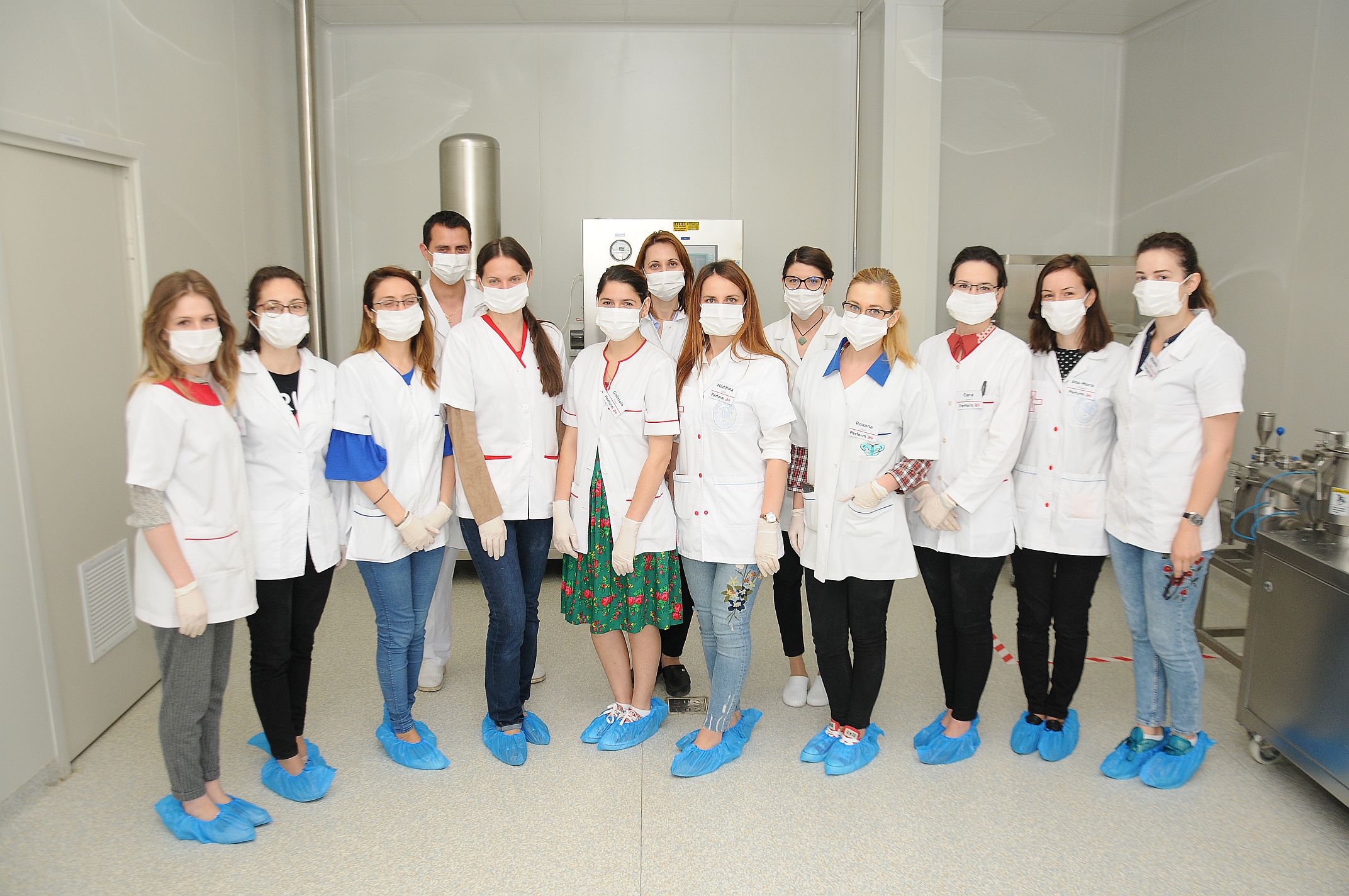 – Antibiotice obtains the certification “Strongest in Romania” 2016: a company
financially responsible, credible and creditworthy to partners in the country and abroad. 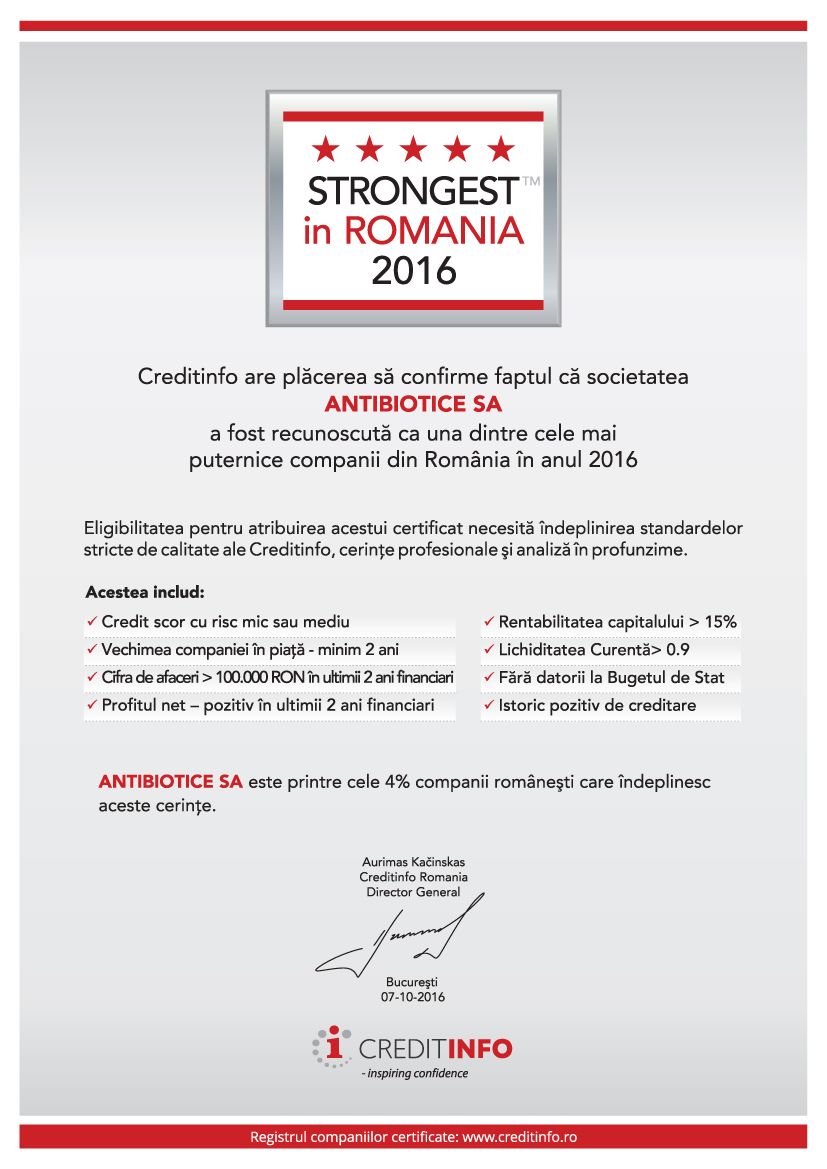 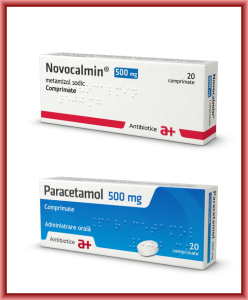 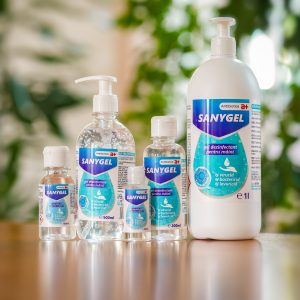 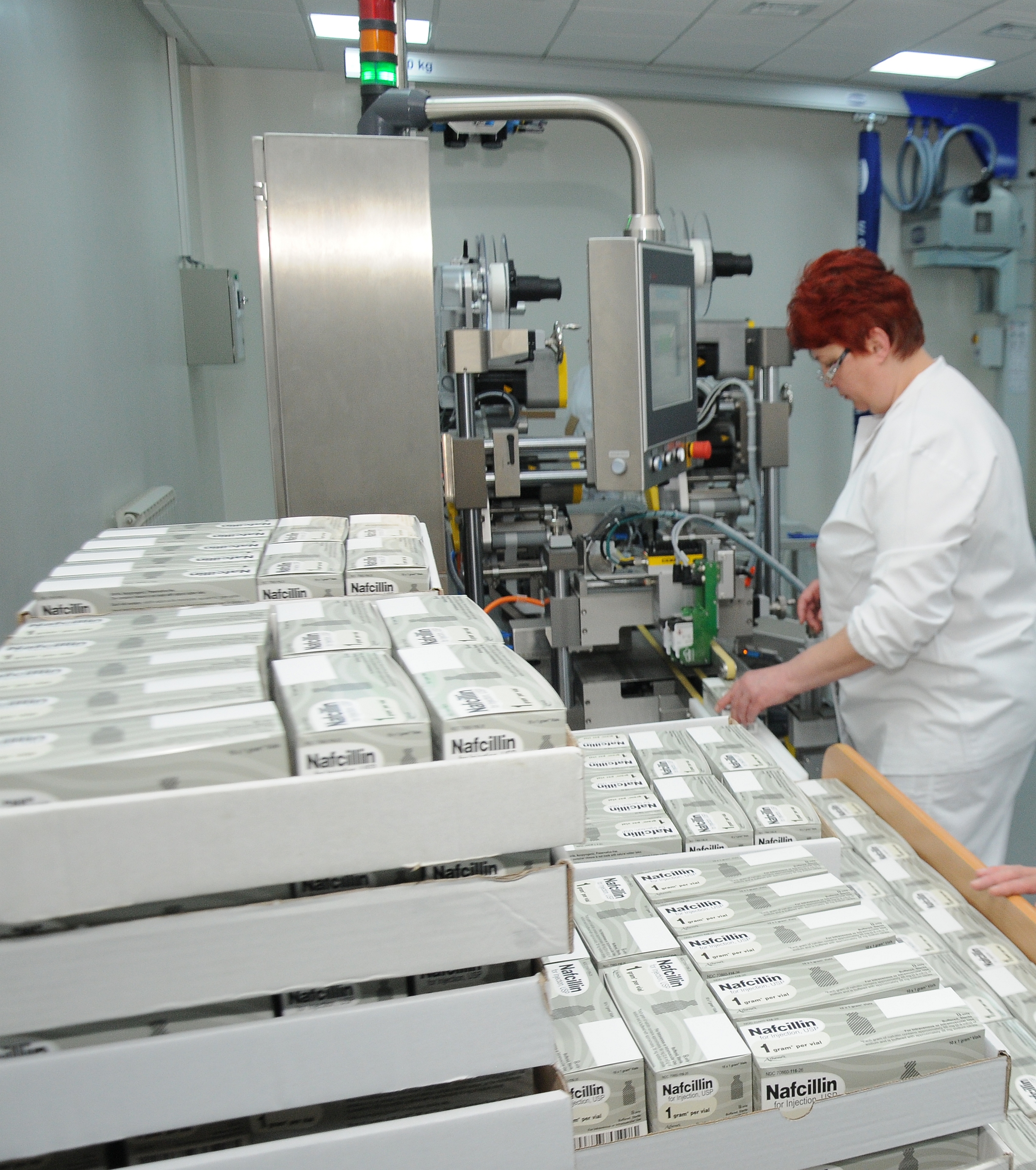 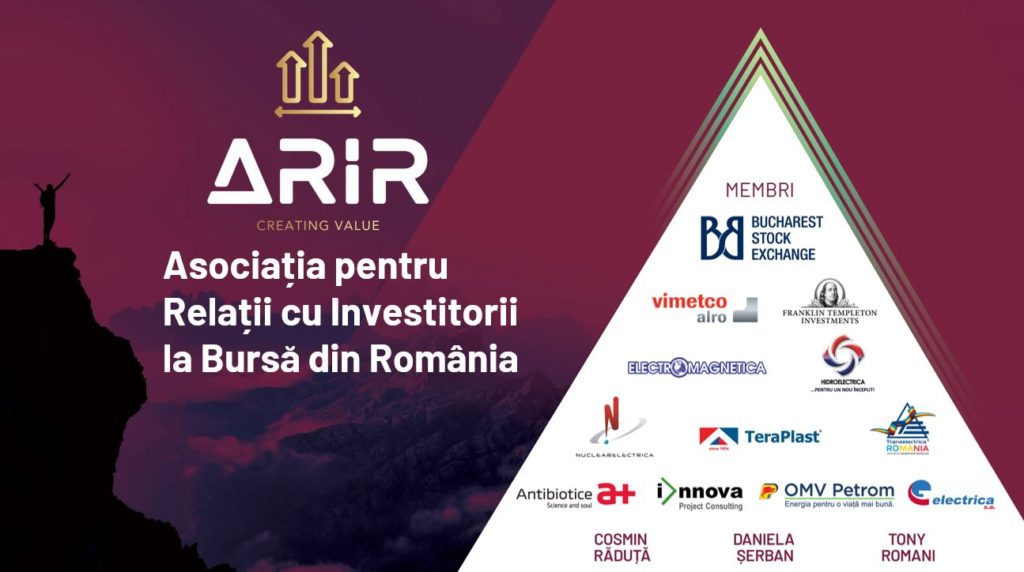 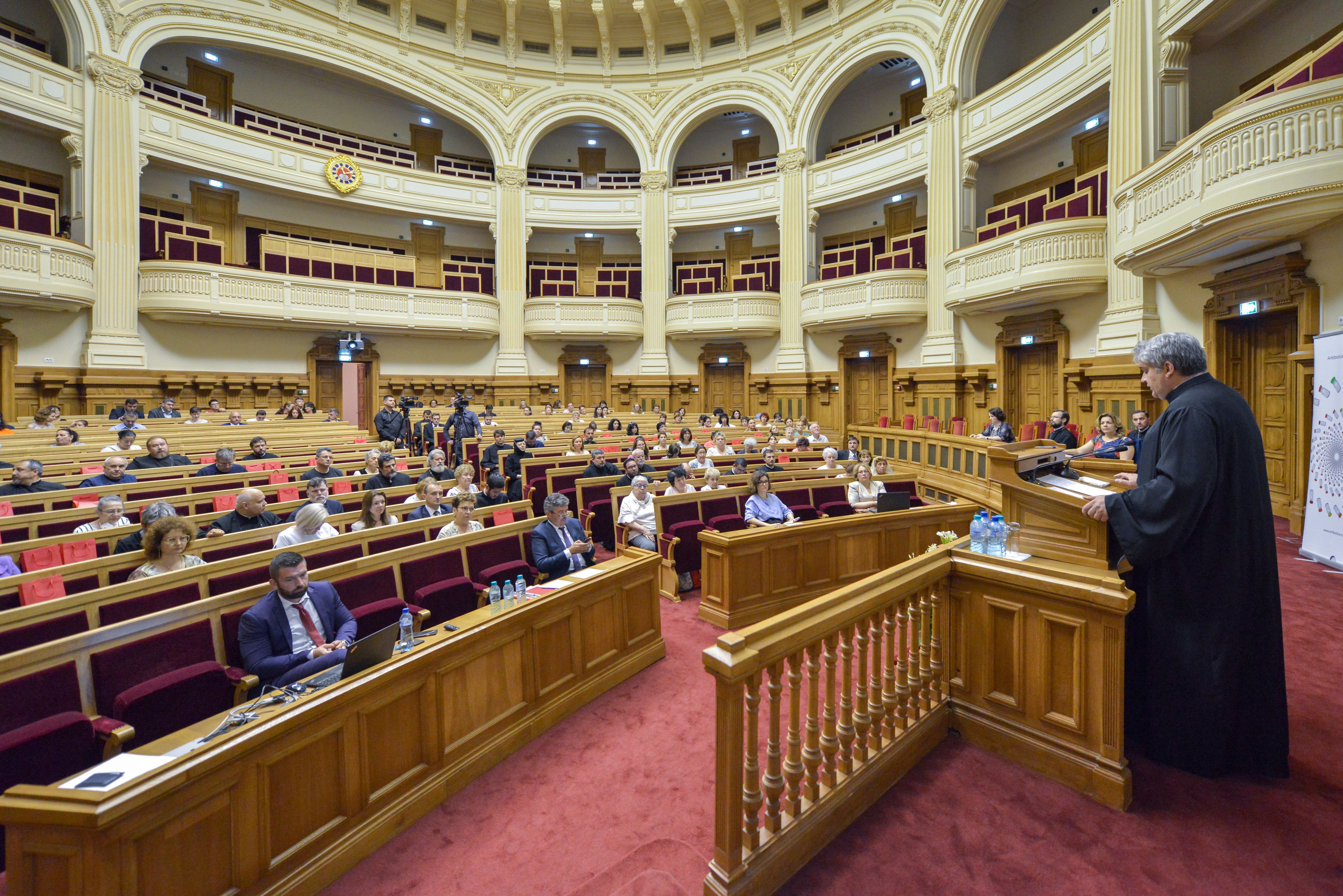 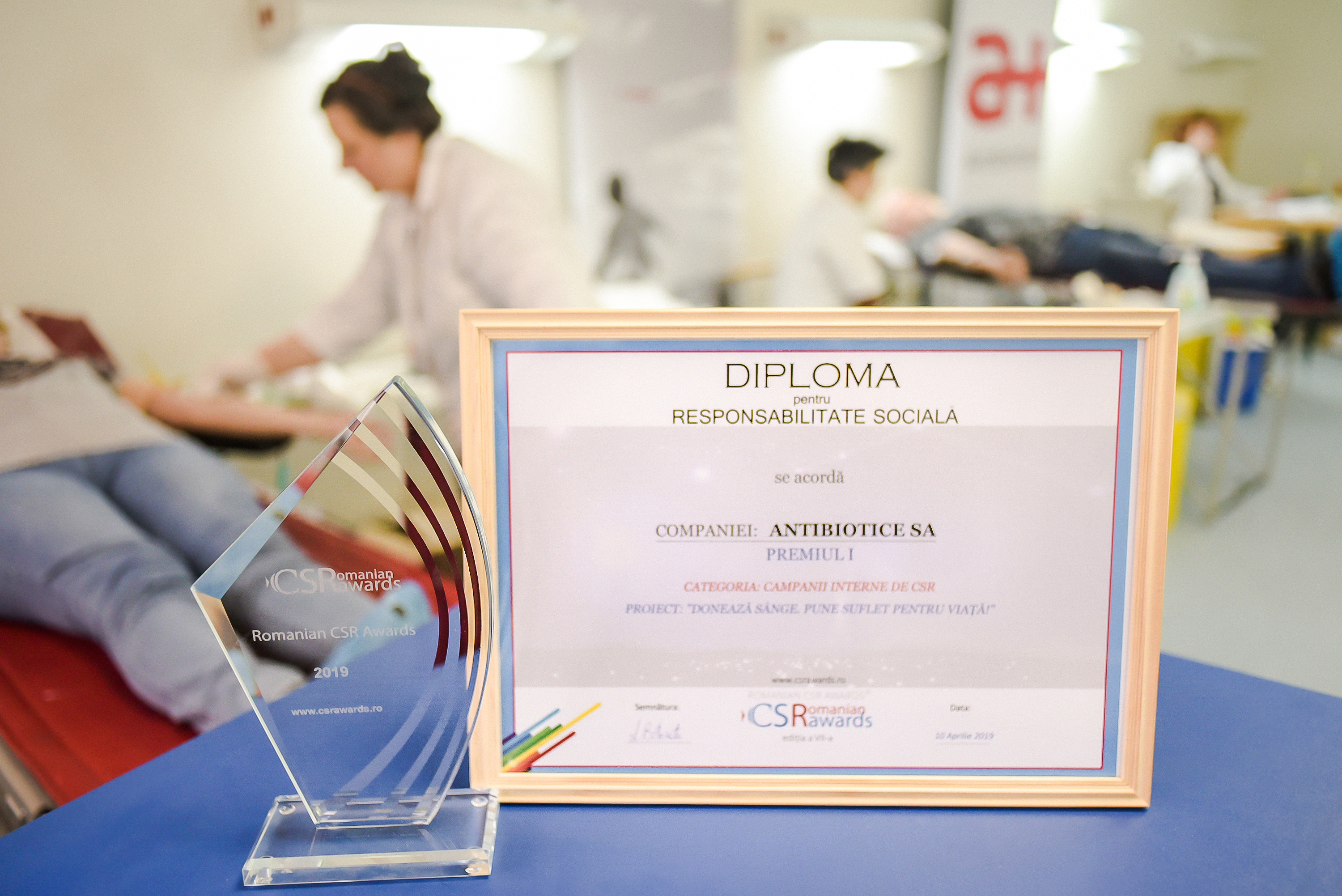