An increase by 10% of the net profit

The main decisions of the Ordinary and Extraordinary General Meeting of Shareholders of Antibiotice, held on April 26, 2018

• The audited financial statements of the financial year 2017 were approve during the Ordinary General Meeting of Shareholders held on Thursday, April 26, 2018.
• In the same context, the gross dividend per share for 2017 was set and the contracting of a long-term investment facility (10 years) in the amount of EUR 15.4 million from UniCredit Bank was approved. 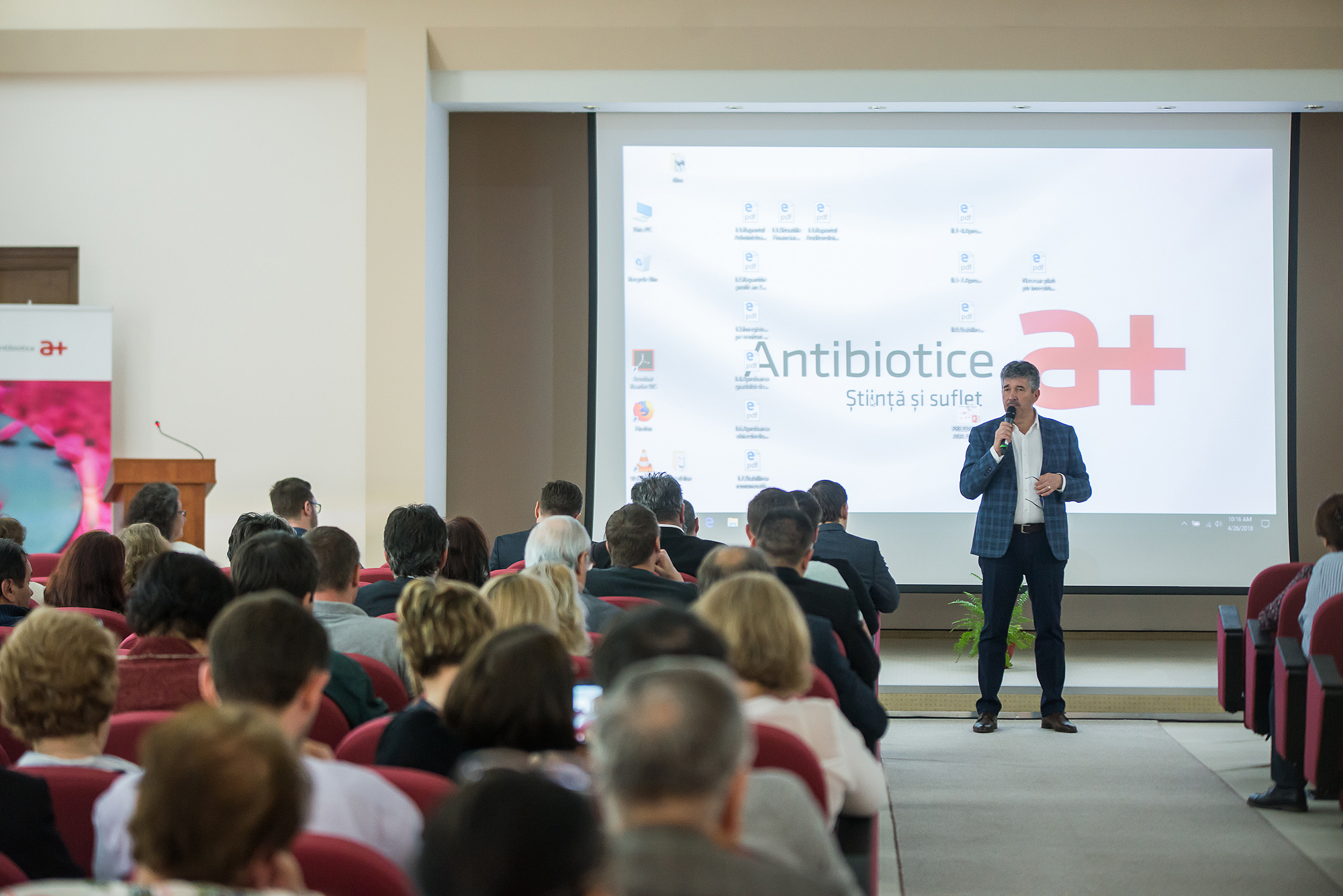 The audited economic and financial results of 2017

An increase by 10% of the net profit
The profit after tax for the year 2017 is RON 33.56 million, higher than the previous year by 10% (RON 30.37 million) and by 17% compared to the budgeted profit. It was reinvested in
accordance with the legal provisions (Fiscal Code, Art.22), namely RON 15.732.585, in the acquisitions of technological equipment, electronic computers, peripheral equipment and
software. The difference of RON 17.825.769 represents the profit distributed to dividends.
The sales revenues of the year 2017 amounted to RON 336.9 million, with an increase by 1.3% compared to 2016, when the amount was RON 332.4 million.

The presence on the domestic market

In 2017 the pharmaceutical market in Romania registered a 9.1% growth in value, rising to RON 14.12 billion, compared to the value of RON 12.95 billion, achieved in 2016. The positive trend was registered also at the physical consumption level, increasing by 8.2%, from 11.7 billion units in 2016 to 12.6 billion in 2017.
In this context, the physical sales (pharmacies and hospitals) of Antibiotice experienced an increase by 11.5% (against a 8.2% increase in the total drug use) and a sales value increase of pharmacies and hospitals of 5.3% compared to the year 2016.
In 2017, through capitalized portfolio, Antibiotice maintained its leading position in the ointment segment with a market share of 27%, suppositories with a market share of 40.3% and powders for injection with a market share of 74.7 %.
At the same time, in 2017, Antibiotice has maintained its leading position on the generic and OTC market in hospitals, with a market share of 17.4%. 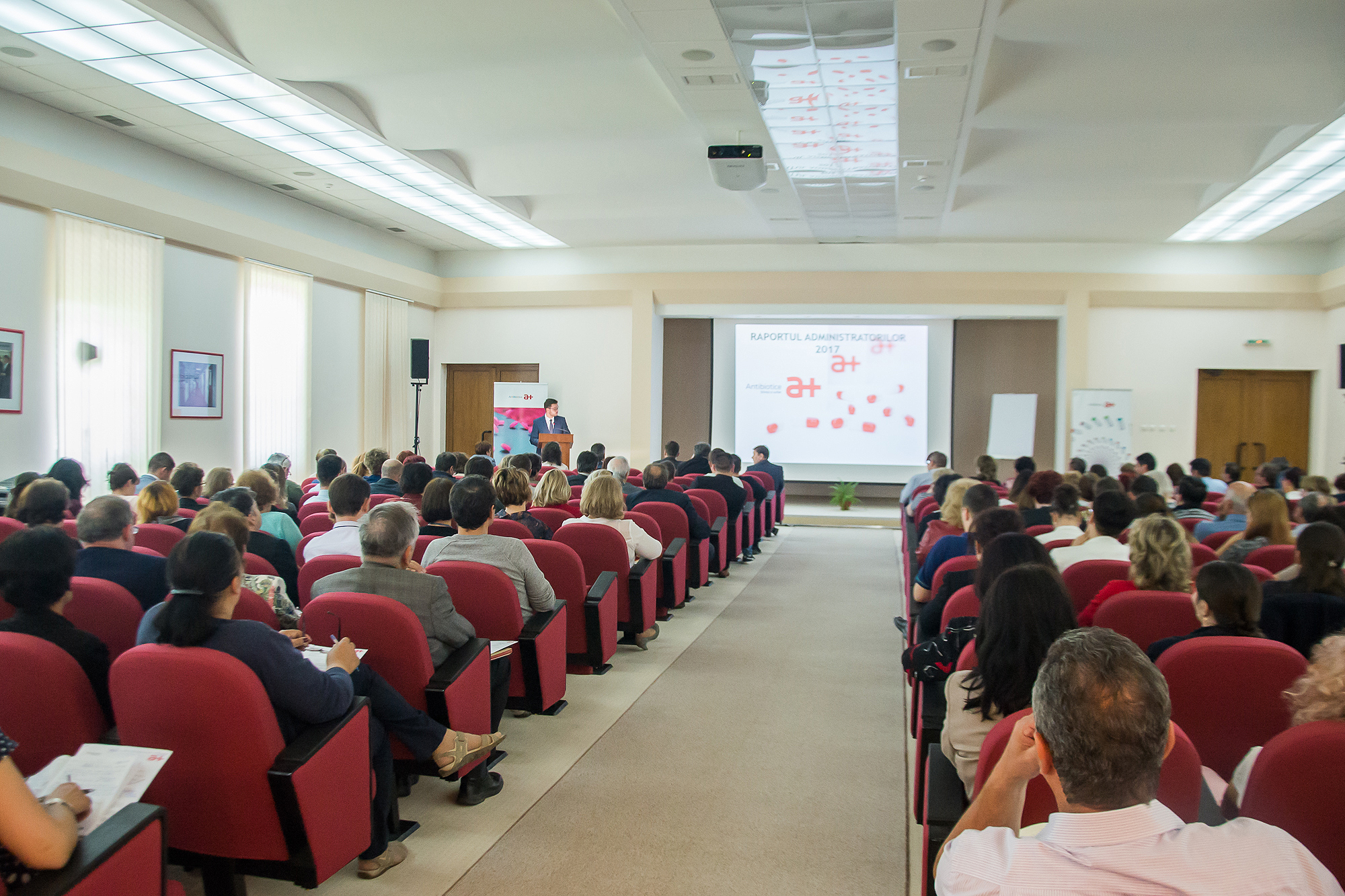 The non-prescription drugs (OTC) have experienced a steady increase in sales over the past
few years, reaching 22% of the total market share in 2017.
Antibiotice ranks 14th in the top of companies operating on this market in Romania (out of a
total of 213 companies), climbing 4 positions compared to the year 2015 (18th place).
The OTC products that have performed are the food supplements Fluxiv®, Silithor®,
Equilibra®, Soriso®, Cutaden Bebe®, as well as the OTCs Clafen® topical range, Saliform®
Forte and Cicatrol®.

The portfolio completion with 7 new products
The portfolio dedicated to human use of 136 drugs covering 12 therapeutic classes attests
that Antibiotice is geared towards the renewal of the product portfolio. 37 products are
essential medicines according to the WHO classification, i.e. medicines that meet the needs
of protecting the health of the population and are used in the treatment of the most
widespread diseases.
Thus, during the year 2017, 7 new Marketing Authorizations were obtained for medicines in
the following classes: cardiovascular, anti-infective and dermatology and 2 new food
supplements were notified: Sprinten® film-coated tablets and Fezivit® C capsules.
The presence on the foreign market
For 62 years of activity, Antibiotice has proved to be a modern and competitive company
that has demonstrated that the performances of the world pharmaceutical industry can be
achieved in Romania as well. Antibiotice has become a contemporary pharmaceutical
company that makes a brand known worldwide as a genuine Romanian brand.

A 12% growth on foreign markets

The Antibiotice exports in 2017 reached US $ 28.75 million, up by 12.08% compared to 2016,
accounting for 35% of the company&#39;s turnover.
The increase in the export sales was generated both by the export of finished
pharmaceutical forms and the Nystatin active substance (an antifungal utilized in both the
pharmaceutical and cosmetic industries).
The sales of Nystatin on the US market, up by 50% compared to the previous year
The Nystatin the active substance holds the largest share in the Antibiotice&#39;s sales on the
foreign markets and, in 2017, the export of this product increased by 10.10% compared to
the previous year. The most significant growth for the Nystatin product in 2017 was
recorded on the US market, where the volume exported was 50% higher than during the
previous year. The increase of the market share in the U.S. is a strategic goal of the
company and the authorizations obtained during the recent years from end-users create the
premises for Antibiotice to become the main supplier of this product on the United States
market. 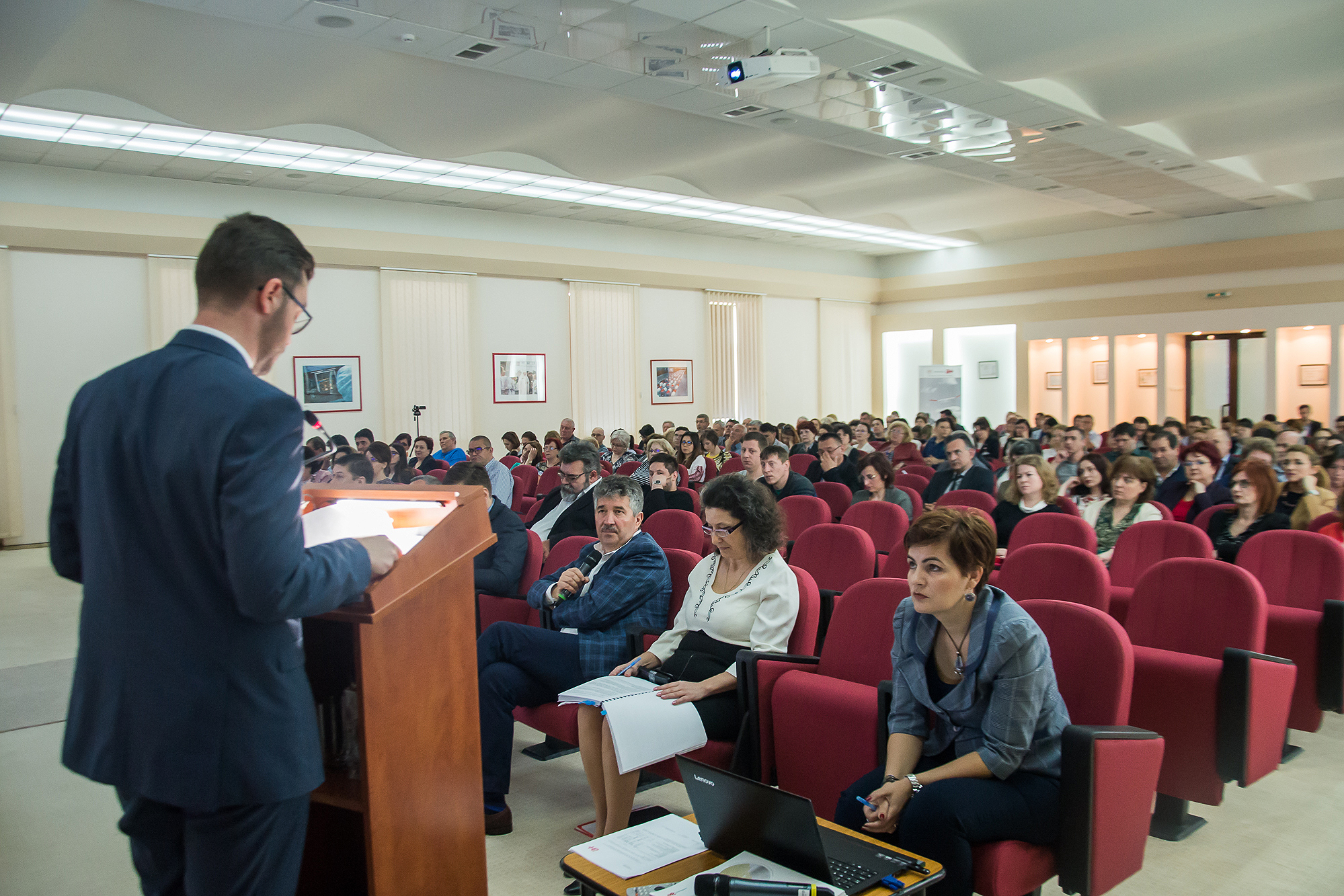 In 2017 , the main markets for Nystatin were: Asia, North America, the Middle East andEurope.
At the same time, 2017 is the third consecutive year in which the Nystatin biosynthetic
product maintains its world leading position. At the same time, this product has been
recognized by the United States Pharmacopeia (USP) as an international reference quality
standard, receiving the USP Standard Diploma and Trophy.

The exports of finished products increased by 18.05%

In 2017, the main destinations for the export of finished products were: Asia, Europe, North
America, Russia &amp; C.I.S. and the Middle East. The largest share in the exports of finished
products was the anti-infective products, followed by digestive tract and metabolism,
cardiovascular, dermatological and musculoskeletal system products.
Given the need to promote products on the foreign markets, Antibiotice has started the
procedures for setting up its own representative offices, the first of which is located in
Vietnam, a market where there have been significant sales growth in recent years. In the
next period, our own representative offices will be opened in Ukraine and the Republic of
Moldova in order to boost the sales on these markets.
9 new marketing authorizations at international level
The results of the research and development stages allowed new international marketing
authorizations to be obtained, contributing to the development of our company on foreign
markets. Thus, in 2017, 9 marketing authorizations for anti-infective and cardiovascular
products were obtained in countries in Europe, Asia and Africa.

2. The establishment of the net profit distribution for the year 2017

Following the submission to vote, during the GMS, the shareholders of the company decided
to allocate the net profit for the year 2017 in the amount of RON 33.558.354, to fix the
gross dividend per share at RON 0.020785855 and to pay the dividends starting with
14.09.2018, according to legal provisions in force. 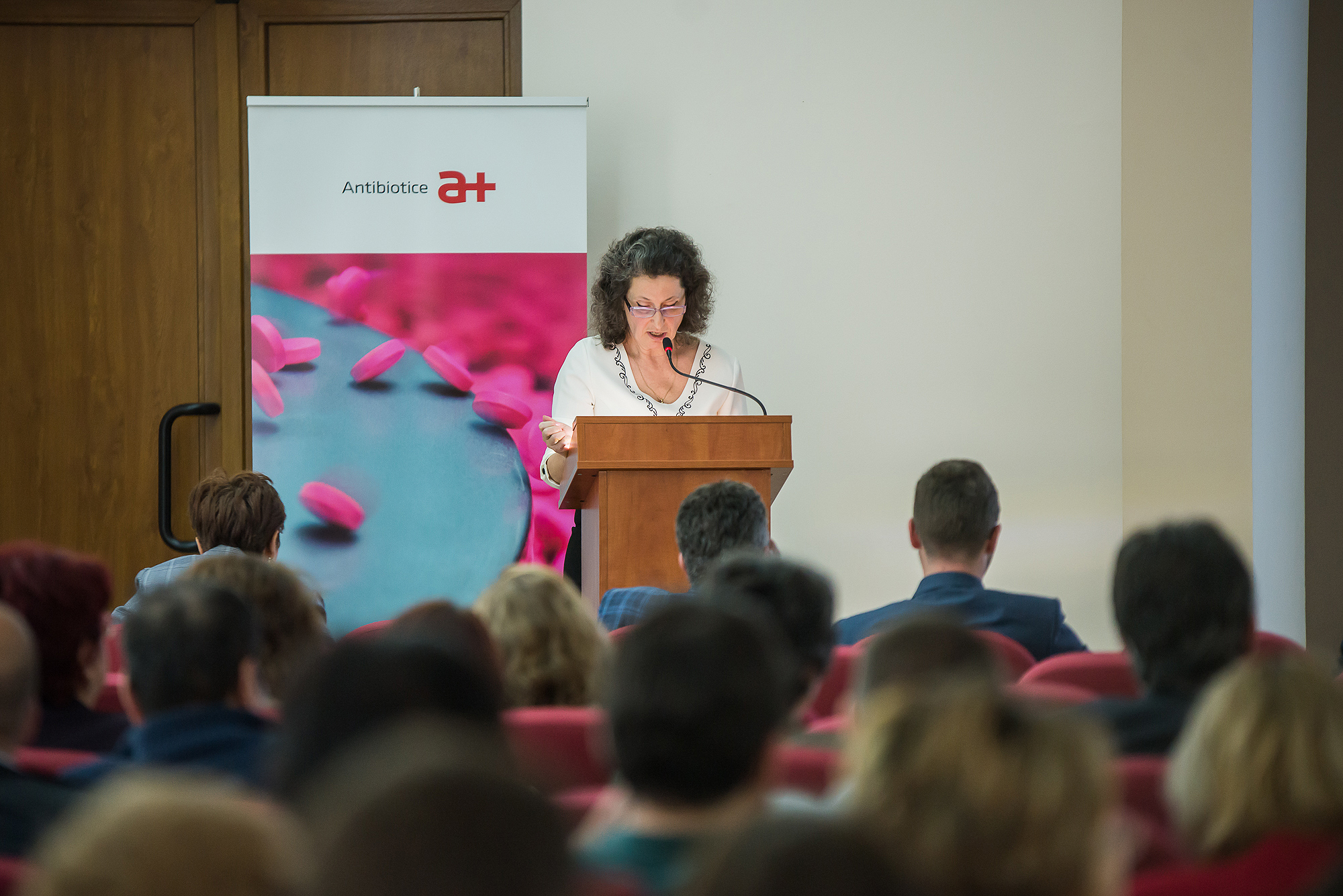 3. The contracting of a long-term investment facility (10 years) in the amount of EUR 15.4 million from UniCredit Bank

Following the vote, during the GMS meeting, the shareholders of the company decided to approve the contracting of an investment credit facility in the amount of EUR 15.4 million.
This credit will be utilized to equip the new Ointments and Suppositories facility with new, high performance manufacturing equipment and to obtain authorizations to meet the
quality standards governing the regulated pharmaceutical markets (Europe, US and Canada).
At the same time, investments will be made in finalizing the serialization process, a process intended to prevent the penetration of counterfeit medicines on the market for the purpose
of the safe administration of drugs to patients.